The sharing of ideas, knowledge and experiences promotes the growth and development of not only the self but the community as a whole. Knowledge that is imparted to another is further strengthened in the memory of the communicator, while the audience benefit by learning something beneficial and new. Delivering these ideas, thoughts and experiences in a creative manner adds more meaning and impact to the message.

Creative expression which could be in the form of creative writing, public speaking as well as art and design allows students to explore different avenue and forms of communication in applying the language, thereby assisting them in their language learning. In addition to that, it has human value to it as creative expression often have the ability to spark a connection with others through the sharing of human experiences.  It builds bridges where others can identify with the experiences or emotions shared, allowing one to feel less isolated and fostering a sense of affinity and hope.

Hopes and Dreams: Traversing Through the Uncertain with a Range of Emotions

ASPer English Week was held from the 25th March till 28th March, 2019. Various activities were held in order to facilitate English language usage among the students in a fun, interactive and engaging manner.  One of these activities was the poetry writing competition which had “Hopes and Dreams” as its theme. From the entries submitted only three were selected as the winners.

Poetry allowed the students to articulate topics and express emotions that may be otherwise difficult to express in other forms. “It is easier to express your thoughts and feelings through poetry than through essays and diaries”, stated Muhammad Haziq Bin Abdul Hamid who won first place with his poem Wonderland is Real. Tan Shu Jia, the second place winner with Hey, Kampung Girl! concurs, “Poetry is not as difficult as an essay, you can express your feelings in a few lines”.

The former who hails from a small village of Rasa in Hulu Langat spoke with delight when explaining her dream that she had penned down. Eyes lit, and with a smile, Tan said, “It has always been my hope to study in a university in a big city”. Her poem Hey, Kampung Girl! had captured that sense of eagerness, determination as well as her personal experience of bitter sweet struggle in pursuing the dream.

Poetry writing also encourages students to build their language skills independently in order to transmit their thoughts and emotions in a style that meets their satisfaction. “I like the flow of the words, the vocabulary used, I like it to rhyme”, said Muhammad Haziq who pays particular attention to the vocabulary and script used in videos that he watches in his free time. “I see if there are words that match to what I have in mind”. Meanwhile the poem Dream: Make a Move written by Ain Binti Ismail required a witty manipulation in the arrangement of words, phrases, lines and punctuation in order to produce a reverse poetry which won her the third place in the poetry competition.

Apart from poetry writing, ASPer English Week also provided a platform for students to share their thoughts, experiences and knowledge with each other. The ability to be a contributor and benefit others can give students a sense of satisfaction. “You can share what you know such as what to do in the event of a heart attack. By sharing, knowledge can circulate”, said Ng Chee Han an aspiring medical student who explained the CPR procedure and guidelines at the Speaker’s Corner. 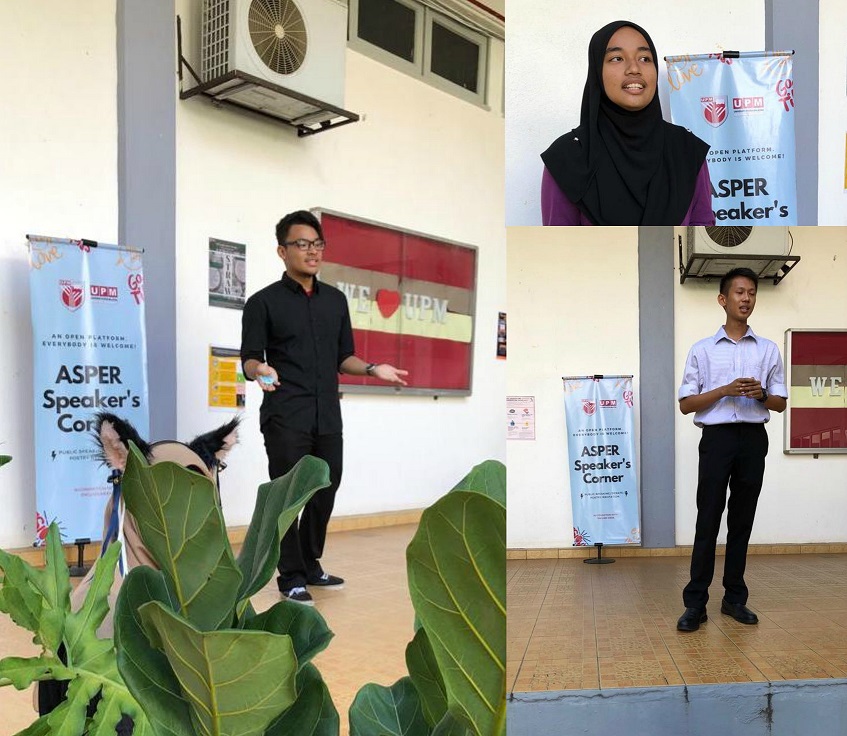 Students who participated and spoke in front of others were also given a badge to mark their achievement, as public speaking is a form of art that is commonly feared by many. The badge reads “Veni, Vedi, Vici” which means “I came, I saw, I conquered”. Nur Izz Dayana Diasin commented on her participation, “I can conquer my fear and talk in front of people, in English.  At first I was afraid of people’s judgement, but then I think it was a great experience”.

Aiman Najmi Bin Mat Rosani who used the platform to address questions from the audience also spoke positively of his experience. “It is enjoyable and satisfying to express oneself to the public. You don’t have to hide yourself. Some people may be afraid that people won’t listen, but in reality, you will have an audience as there are people who like to listen to talks such as myself”.

Addressing Issues Through Creativity and Humour

Another competition that was held in conjunction with English Week was the Comic Dialogue Competition. Creativity, defined as the ability to make unique connection between two seemingly dissimilar things, is a prerequisite in coming up with a storyline and speech balloons that would match the given drawings.

Students produced a variety of storyline according to a genre of their choice. A popular genre was science fiction where students could mix science with a little bit of imagination and humour. “I chose science fiction because I love science”, said Mohamad Syafi Zikri Bin Sarizan who won second place with his entry. Using the comic strip, he touched on the issue of vaccination and misconception in a light and comical manner.  “This competition has helped me in terms of expressing my thought”, he said.

A Week of Educational Entertainment

Students were also presented with five choices of games that needed them to apply and combine language skills with other skills such as creative thinking and design. “Project Runway can benefit the students a lot by giving them a medium to enhance their creativity and boost their confidence level during any presentation in public. Students had to think on how to dress up a person according to a theme in just 12 minutes..using recycling materials,” said Geeta Vaani who had to come up with a design based on the theme “historical figure”. 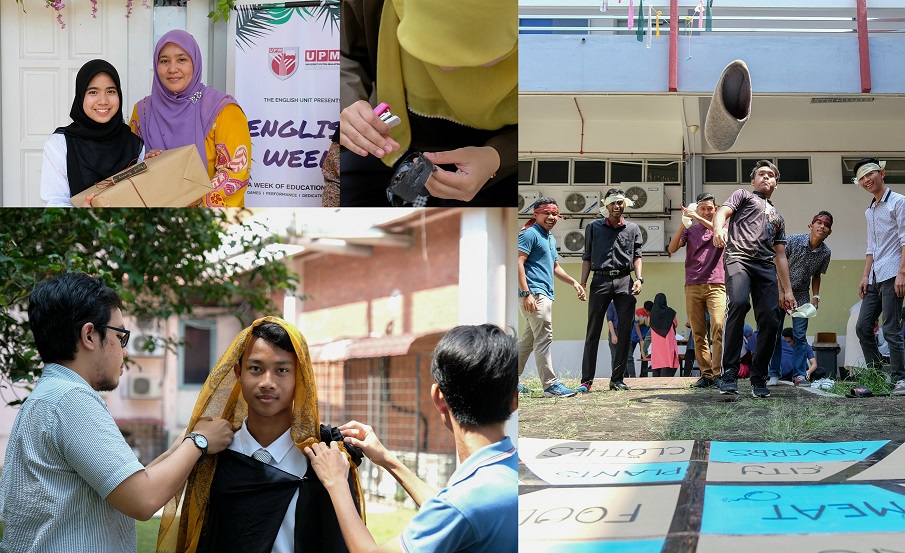 Meanwhile Nur Dayana Syahira Binti Mustaffa participated in the game Vocab-Kick and said, “Many values were obtained during the activities such as strategic planning, importance of communication and cooperation between team members, among others”. Fairuz Hafizah Binti Md Yusuff added, “Vocab-kick brings us closer to our classmates.. this is because we spent quality times together in achieving higher points”.

All five games Project Runway, Vocab-Kick, Find Me, Lost Words and Words Worth were conducted in teams thereby promoting interaction between members in the English language. Students were able to use the language casually in addition to focusing on a specific language skill. “Words Worth is quite interesting because students need to produce as many words as possible from the word ‘PARTICIPATION’. The time given was only 15 minutes and it really challenged our vocabulary skills”.

ASPer English Week is an annual programme organised by the ASPer English Unit beginning this year, and aims to boost students’ interest in the learning of the English language.